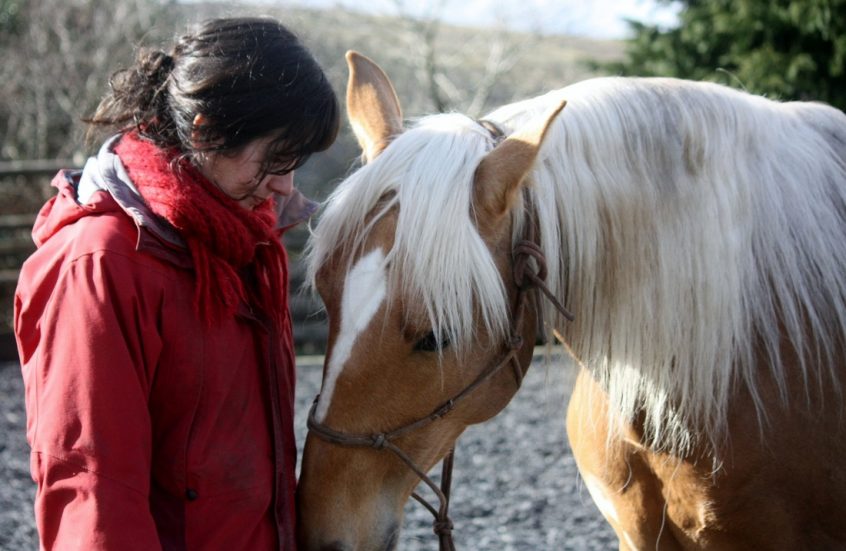 ‘Other people’s treasures glitter and twinkle, mine won’t go through puddles and spooks at gateways’

I have had an interesting email discussion with my friend and mentor Karen Musson this week. I was describing my concern about how much it is my responsibility to suggest to someone that the horse they have is not the right one for them. I sometimes meet people and horses who are having a miserable time together because they are just not well matched. On the flip side, I also meet a lot of horses considered to be challenging, dangerous, a physical and emotional wreck, but with a person determined to work with that horse and find a way to make things better. Hmmm.

How do we know when a horse is too much for us and that they might be better off with someone else? And how do we know when we should push on – that this is the horse who might offer us ‘the golden ticket’ to better horsemanship (Karen’s phrase). And when is it o.k to admit that you don’t really gel with this horse and that you don’t want to spend the rest of your life attending to his every need when you actually just don’t like him that much?

I don’t know. But I do know how very, very grateful I am for having found myself a horse that suits. In fact he suits so well that I rarely write about him. I usually write about those difficult, challenging horses who have stolen and broken my heart , and I forget to mention him.

So on this occasion I want to write a little about Desaforo. Desmund. Desult. My horse that suits. He is me and I am him, and I don’t need to mention him, because he is just easy for me and so what is there to say? Except, how hugely, enormously grateful I am to him, and how, when in recent months he has been injured and out of action I have felt like Samson after he had his locks snipped.

I think it is easy to believe you only learn and develop when you have a ‘difficult’ horse. But let’s be honest, most horses are difficult in the wrong hands, and that doesn’t even mean ‘cruel’ hands. It just may be that a person and a horse aren’t suited. I think it was Tom Widdicombe who said to me concerning marriage, you just need to work out if you can tolerate the bits about the other person which are annoying . What an old romantic. As I have no annoying traits, I know this isn’t an issue for Adam, but it’s worth considering this with your horse. Can you take the rough with the smooth? And can you horse do the same in return? Can you tolerate each other’s annoying traits?

Des’s name in Portuguese (Desaforo) means ‘affront’ or ‘outrage’, I have even seen it translated as ‘petulant’. For a long time I resisted those definitions, but now I think they may have hit the nail on the head. Des, like me, has a strong sense of justice; he is often affronted at how UNFAIR things are. He is also inclined to get narked at my tardiness – how long it is taking me to hang up his haylage net for instance – or just at my dog Herbie’s mere existence (I am with him on this one too, why are you always there Herbie?). He is often about to die as a result of some seemingly minor injury (spot the similarities dear friends?) and has spooked at the same jump stand lying next to the school for the past year.

One of the reasons I don’t get wound up by his melodrama (and believe me, he does love a touch of the dramatics, he is Portuguese after all) or impatience, is because of how it feels when my bum hits the saddle. It is Home. I have ridden a lot of horses, and with the exception of Gou ( who I had to be prized off with a spoon) there is no other horse I love riding so much. Everyone needs a horse like this in their life. It is what makes the hours of slog, mud, cold, endless lifting of water buckets and bales, lack of money and time, and incredibly irregular trips to the hairdressers, worth it. From the moment I sat on him (having ridden countless other fabulous Lusitanos in that fateful week) I knew I had to find a way to bring him home. 6 months later, with a serious bank loan and a horse who had kept himself from being sold due to being a melodramatic berk, I managed to purchase myself a new pony.

In absolute all honesty, it is NOT just because he is a palomino Lusitano. I swear. And he is actually not that easy to ride – he is pretty flipping crooked, he is inclined to rush , or hollow and shoot off; he is incredibly impatient and has a mean spin manoeuvre , which when combined with a run up a Devon bank did see me hit the deck at some speed (100% operator error I should add in his defence). However, from the moment I first sat on him I knew this was the horse I wanted to ride for as long as we both can keep hanging on to this mortal coil. There is something about his energy, and us together, and something else I cannot even put into words (I guess under saddle he gives me a little glimpse of that door into Narnia…) which makes him perfect for me.

I think we all need to celebrate these horses. For someone else he would definitely not be perfect. He is not the kindest, sweetest creature ever in the same way as Tycoon; he is not funny and yet glorious in the way Garbanzo is – in fact, he is rarely anyone else’s choice of horse when they meet my herd. But that’s because they don’t know how it feels to canter him across the moors. Or, when we’re not spooking at the jump stand, how it is to work on some really nice lateral stuff in the school. Or, just what it’s like to clamber onboard after a long, sometimes sad day and see those pricked yellow ears in front of me and feel that delightful bounce of his spindly legs (probably getting ready to do a mega spin about a fern in the hedge) as we head up the road.

He is not that sweet, or that brave and sometimes I suspect, not that clever. And he is not even that good looking under that golden coat. But for me, he is bloody brilliant and I often whisper a huge thank you into his muddy shell-likes.

Finding a horse that suits is a very personal thing, and what suits one person might not suit someone else. I find it sad when people hang on to a horse out of sense of duty when that horse might have found a human he suited somewhere else, if given the chance.

So, I don’t have an answer as to how people work out whether their difficult, challenging, sometimes dangerous horse is worth persevering with. We all have to try to be sensible in our appraisal of our skill level, experience, and what we actually WANT when we’re working with a horse. If you want to just amble around the block once a week (and there is nothing wrong with this) probably don’t get yourself a 4 year old TB. Then there will always be some combination of person and horse which disproves that rule, as this just isn’t an exact science.

What I would say is that if you really don’t like your horse, he probably isn’t for you. And if every time you work with him he scares the bejeebers out of you, have a think about whether this is really what you want to be doing with your time. However, for myself, if there is that little bit of your heart that sings when you spend time with that horse, and you really, really, really want to put the time, effort, money, and energy into working out how to get along together then it might be worth it. Or, you might just get yourself something easier. Who knows, but I do know that having a horse that suits is something I am enormously grateful for. Dear Desmund, thank you, you are to me, perfect. To everyone else who knows you, you are a petulant berk.