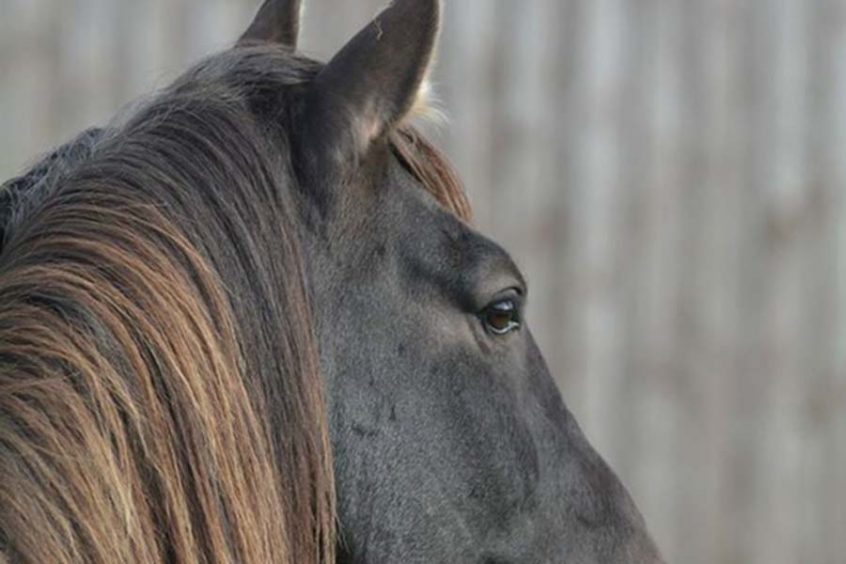 I have found it hard to know how  to write about losing Tycoon,  my 9 year old PRE. I couldn’t say anything to anyone for quite a while as the pain in my chest was  too great.  But the death of what was, let’s face it, my favourite horse (don’t tell!), has changed things in ways I didn’t expect. The obvious bit is the huge hole he has left. Every day I miss seeing him come hurtling across the field trying to direct what every else is doing (it was ALL Tycoon’s business). My shoulder feels lost without his chin resting on it.  I still can’t believe I won’t ever look down and see his great big neck in front of me and the tufty brown bits sticking out of his ears.  That’s the thing with loss, it takes a really bloody long time to sink in.  Like, a long time.

However, the absolutely ridiculous nature of his death has given me a different perspective on life for which oddly I am grateful. I know you’re not supposed to say that when you lose a loved one, but Tycoon doesn’t mind I suspect.  I know that the same is true from losing close members of my family and that’s not a conversation I have either.  Of course, I would trade in everything I have, know or have learned  to have them back, but the world doesn’t deal in trade offs, so you’d better work with what is actually laid out in front of you.

I have already written a lot about the lessons in horsemanship I learned from Tycoon, so I won’t go over that again. The brief version is, I bought him to learn high school on, I ended up learning about leading.  Tycoon had a humdinger of an accident before I got him which left a huge and never healing scar on his side. I always suspected he might not make old bones as his health was often compromised, and his training schedule was always erratic as sometimes he just couldn’t handle working.  He was given honorary ,‘You can just hang out’ status early on, and I committed to dragging him with me wherever I went whether he was a riding horse or not.  He was SUCH a lovely creature to just spent time with that he had a life long pass to dossing about if he wanted. And then every now and again he would be O.K for riding and off we’d go again for a bit. I loved him as a friend more than any horse I have  known.

This is how he died.  I took my first holiday for 3 years. Life in my family had been been, well, blurrggghh. Serious horrible illnesses, care homes, complicated never ending paperwork, and deaths  of people I loved which I was honoured to be a part of, but which left me staring at the ceiling in the middle of the night for months.  No real enjoyment for a very, very long time.  At the same time, my colleague and mental health practitioner, Desaforo  (grubby palomino Lusitano) was diagnosed with some serious physical issues and was off work for months. I bought what I hoped was going to be a replacement for him, Remy, who turned out to be pretty much the most emotionally, financially and practically disastrous horse I have ever bought (and I’ve had a few stinkers…).

Just before I left on the much longed for holiday I started riding Tycoon again and it was great. We were getting on really well and I said to Sarah, ‘I’m feeling really optimistic about this horse!’. ‘Careful…’ she replied.

Day 3 of a holiday I wasn’t really enjoying as it turned out I had taken myself with me (bummer), I got a phone call from my wonderful ex, Adam, who loved Tycoon as much as I did, telling me Tycoon really wasn’t well. I have had a few of these kind of phone calls and they never get any easier.  My first reaction is usually to get livid.  Clearly the person on the other end of the phone is wrong, there has to be a mistake and if they’d just look again, they’d see that. Then my vet called and using his kind voice (unusual) confirmed that if I wanted to see Tycoon I should really try to come home right now.

My lovely friend Janet, stepped in straight away and organised flights home for me the next morning, but at 3am Adam called to say Tycoon had just died. I flew home between two strangers, and then got a packed  train back to Devon, issuing forth an unbroken stream of snot and tears. Clearly no one looked at me or asked what was wrong as British people know that the best thing to do with a person in distress is ignore them.

Tycoon had got tetanus. He was vaccinated against it, and no horse in this valley has had tetanus for as long as anyone can remember, but he wasn’t going to be beaten by those kind of odds, no way! A tiny minority of horses who are vaccinated can still get it, and he did.  I looked at the universe through stink eyes for several weeks. O.K you bastard, so you pile hideous illnesses on my family and pick them off one by one and then you do the same with my horses??  QUIT IT.
At the time Tycoon died a friend of mine said that all of it was perfect. The shit as well as the beauty. At the time I wanted to punch her – what did she mean it was all perfect??  What on earth about Tycoon dying could be perfect? But as the weeks have gone on I think I have begun to understand a little of what she means. If there is no Machiavellian plan levelled against me (and my rational brain believes that to be true)…then it’s all just ‘stuff’. Some of it makes you very sad, some of it makes you very happy, but it’s just stuff.  That’s all. And I made a decision that I was going to enjoy the good stuff wherever I could blooming well find it.
​
I am trying to look upon each day as a point of interest – what ‘stuff’ am I going to enjoy today, what am I going to find challenging and what is  going to make me look at things differently? I have momentarily (I am sure it will sneak back in again…) stopped believing that sheer determination and hard work will put me in control.  Vaccinations couldn’t save Tycoon, and To Do lists can’t save me. I am going to keep trying to do the things I want to do, of course, but I am going to stop gritting my teeth and holding my breath while I do it. I am enjoying a short hiatus from thinking I need to put my back into everything and am bimbling through what happens each day and sleeping well inbetween for the first time in years.

With a little help from a friend I have also been working on putting guilt to one side. And with that I found a retirement home for Remy. Since she had arrived she had taken up 80% of my horse time and I was exhausted, skint and miserable. She had cost my thousands and I had sat on her 3 times. I try my best by horses but the death of Tycoon pulled me up short – I also want to enjoy them. Some people love rescuing horses and not riding them and that is absolutely,  totally fine with me and what a brilliant thing they do. But it’s not what I want to do.  I have served my time rehabbing horses and looking after other people’s waifs and strays and I’m done with it. With the help of some friends again (look how many friends have stepped in to help, what a lucky girl I am) a home which can cater for Remy’s needs has been found. I have no savings left, but I know the right decision was made for us both


Another friend of mine had some serious difficulties in her early life and ended up in rehab for a year. She said that year of being pressed to really, really look at who she was and what she believed about herself and the world was totally life changing.  What a shame  that we so rarely get a chance to really do that kind of internal unpicking unless something really traumatic happens.  Of course I wish that Tycoon wasn’t dead, with all my heart.  But I am as grateful to him in death as I was in life in how he has yet again shifted the view through the kaleidoscope to something new and interesting.  Trot on little brown legs, see you on the other side.