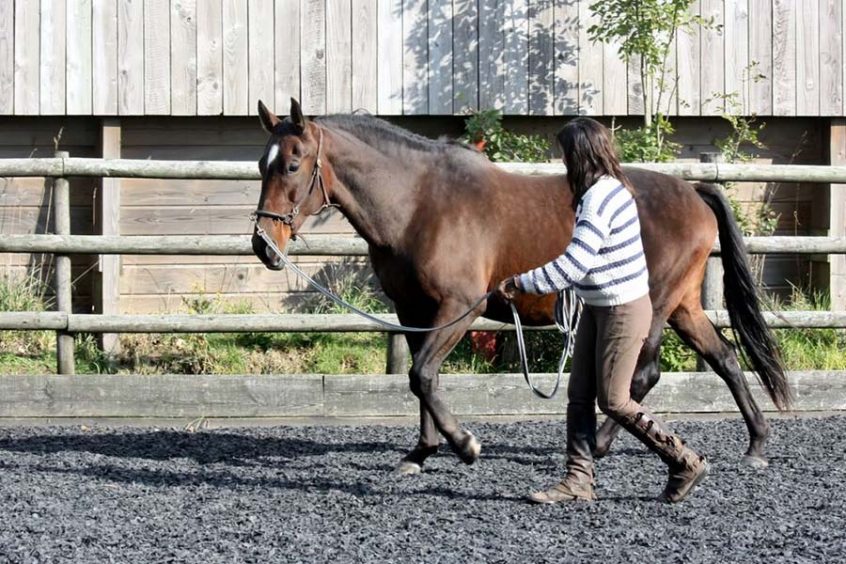 About a decade ago I started to get panic attacks. If you have ever had them you will know what an utterly ridiculous thing they are – your brain convinces you that you are going to die despite the lack of lions or marauding hordes. A seemingly small incident trips you into full panic mode, your breathing goes wild, your heartbeat through the roof and you honestly believe you are going to die. What a laugh, thanks brain. Thankfully, I met a remarkable therapist who flipped some switch in my mind tank which literally stopped my panic attacks in their tracks. Hallelujah. My brain found a new way to respond and I could resume normal service.

As some of you may know, a couple of months ago I bought myself a Lipizzaner mare that I planned to slip seamlessly into my herd as my second in line steed to train with Philippe Karl. However, the move, her breeding, the change in circumstances and re-introduction to work (she had spent 3 years not working , living with her small herd in a field) blew her Hungarian brain and for the first few weeks she was permanently having a panic attack.

I want to talk a bit about what I have been doing to help Remy with her anxiety, but I need to explain that in the initial days my motivation was not entirely selfless. I also wanted to stay alive and in one piece. Crazy, I know. So, although I employed approaches which I hoped would ultimately help her feel better, I pretty much just did what I needed to do to keep me safe. Which in turn meant I might be alive long enough to be able to help her feel safe. The number one thing we worked on was DO NOT RUN ME OVER. I did this in any way I could, everywhere I needed to and it involved me carrying a tea towel on a stick. It also meant that sometimes the 400 yard walk to the field took 45 mins as I repeated this again and again – Do Not Run Me Over. Every single time she decided to shoot past or through me, or carried on walking blindly into me as she peered at whatever she was worried about, then I tried my best to explain that she needed to pay attention to where I was and what my feet were doing.

This was emotionally and physically draining work, but I didn’t have much choice. And what I really, really hoped would happen is that Remy would begin to recognise that I was not punishing, that my intention for us both was good and that I was consistent. And that in time, she may begin to see consistency as reliability. And that reliability was a really useful thing for a horse who was worried about life. If she didn’t come to realise those things, at least I wouldn’t get stood upon.
I am not often proud of myself but I am quite impressed with my tenacity. This became my moto – when Remy gets anxious DO SOMETHING. You might get it wrong, you might be unsure what to do, you might realise afterwards that you should have done something different, but don’t leave her alone with her anxiety. In early sessions with her this could mean ‘doing’ something every half a stride when leading her in. I wanted to show her there was an alternative to anxiety and that I might have some part to play in this. I didn’t want to leave her practicing being anxious as she is clearly a past master in that.

Let me give you an example. In the evenings I would lead Remy out of the field to eat her dinner in the adjoining paddock. She was so worried that even this was a trial for her – she would snatch a mouthful of food and then stare out into the distance- rigid with anxiety. Every single time she did this, I would say something to her, usually down the lead rope. I would pick up what is often described as a ‘feel’( which I guess we all have our own version of), and attempt to show her that I had noticed her anxiety and was presenting an alternative. To begin with I would meet a concrete horse at the end of the line. Eventually she would return mentally, relax and begin eating. And then a bird would cheep and we would go through the whole thing again. What I was attempting to show her was that she didn’t need to be responsible for worrying about everything all the time and I needed to give her more experiences of relaxing than panicking. The odds were somewhat stacked against me as her brain took the super highway to anxiety before you could blink. However, over the weeks, the time lag between Remy beginning to worry and responding to me began to get smaller.
​
When I have not known what else to do, I have hung on to this theme – when Remy is anxious I will try to show her an alternative . I don’t always know how and sometimes I try things which at best don’t work and sometimes make things worse. Some days I have wondered if anyone would notice if I turned a bay Lipizanner out with the local Dartmoor pony herd. On other days, I have been blown away by her ability to learn something, or handle something which would previously have sent her spinning. When she is feeling o.k. she is one of the sweetest horses I have ever met.

I was beginning to worry that I was trying too many different approaches. Sometimes it seems better to blend with what she was offering and then attach an aid to it, on other days actively breaking her chain of thought and asking her to pay attention to me was more effective. Some days being structured and working on ‘stuff’ really helps, on other days being more freeform is more her bag. Sometimes being very firm helps, sometimes being as mellow as possible gets to the nub of it. I was beginning to wonder if I should just stick to one approach and apply it every time. Then, while flipping through Bill Dorrance’s book I came across this typically impenetrable and utterly lovely passage:

“There are many different ways to present feel to a horse so you’re continually going to be searching and adjusting. By that, I mean just changing what you present to him as the circumstances change, and as the horse’s movements and (facial) expressions change. You’d be doing this all the time that you’re working with him and be all the time real aware. ….But, by putting in that last part there about all the time being ready to change what you do, we’re not saying that being consistent with a horse isn’t real important too. It is real important to that horse’s foundation that a person be consistent.”
​
Be always ready to change and always totally consistent. Thanks Bill, What could be more straightforward? The riddle and the temptation is found in this. It’s what keeps drawing me back to working with a horse like Remy. Your foundations need to be utterly consistent, your presentation perpetually adaptable. How many lifetimes do we get again?