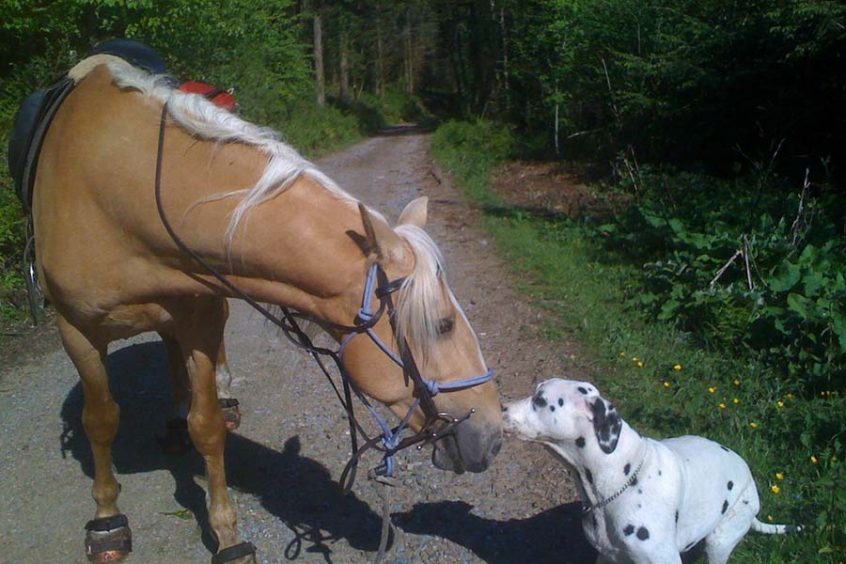 I think the punchline to the joke currently going around facebook is, ‘Get the housekeeper to do it, I’m off to roll in the mud!’. Which does resonate with me somewhat…

However, what got me thinking about this post was a friend asking which of my horses had the highest IQ. I guess IQ is a human construction, and possibly not even a very useful one in terms of measuring who might be better at being a human….However, I reckon what was meant by this was which of your horses ‘thinks’ the most.

I would say all of my horses are excellent at being horses and their HQ (Horse quotant) is high. However, even on this front, the lovely Desmund probably scores the lowest. He is an interesting horse and pretty darn trainable under saddle, but on the ground, and in the rest of his life, he is not always entirely with the programme. And I think this is because he has not really been asked to ‘think’ about his situation in a human world and how he might best deal with this.

Here are a couple of examples. Every day I lead all three of my horses out of the field, down the road, round a gate or two, and then they each go into their stables. Tycoon and Garbanzo understand this deal, and helpfully make their way around the gate, turning, backing up, waiting (with Garbanzo occasionally trying to take my hat off if the whole thing is taking too long). If one of them gets left behind, or a rope gets tangled they try their best to sort the situation out without me having to show them what to do. Des, on the other hand, would still really like you to move the gate around him. Or him around the gate. But he has not yet learned that he could play some part in this situation and get himself around the gate.

If there is a wheelbarrow in the way of where one of the Spaniards would like to be, they carefully negotiate their way around it, whether they are attached to me or not. Des, however, would walk blindly into it, over it, and through it, looking only vaguely surprised when the fork that was resting over it wacks him in his nether regions.

I am having some issues with my field gateway at the moment, as it has begun to resemble a scene from the trenches. A few days ago, whilst trying to get the three of them round and through the gateway, I lost a welly and let go of the lead ropes in the intervening round of swearing. Tycoon and Garb both felt the ropes drop and stopped, Des on the other hand wandered off down the road – away from the stables and the other horses looking calmly at nothing. I have no idea where he was headed, but as every day for the past 3 months we have gone across the road to the stables, I was a little surprised.

Now there may be something they were born with – Tycoon particularly can pick up on the intent of the person and is quite remarkable in terms of being involved in a task with you (as long as it doesn’t involve a quad bike). However , I don’t think Des was born dumb – I think he just hasn’t as yet learned to ‘think’. Most of his life in Portugal was managed for him; he lived 23 hours a day in a stable, he was lead to the indoor school, tied up tight, tacked up and leapt up on. Now, I hope I have been clear that there are many things about his start in Portugal for which I am infinitely grateful. This is not about knocking the way things are done at all, and under saddle he has been taught to listen to his rider and knows how to learn. However, this has not been translated to the rest of his life, and it is something which I am slowly chipping away at. The temptation to just manhandle him around a gate when the rain is lashing down and its pitch black is great. However, everyday, I try and present him with tasks like this in a way which means he has to work it out – and we are getting there. Yesterday, for the first time, I didn’t have to actually ask him to take steps backwards when the gate opened, but in unison with the other two he quietly stepped backwards to give it space.

He is beginning to realise that there are things I am asking him to do, like lower his head to have the bridle put on, stand still to be mounted, or move around with me as I put rugs on, which have some logic to them. The tasks and the human are beginning to make sense to him. It is a pleasure to see some of these ‘lightbulb’ moments . And the benefit of this which I didn’t really see coming is that he is becoming a ‘softer’ horse. In his body and mind he is beginning to mellow (ok, maybe not at dressage events just yet…) and things he used to do, like butt your hand out of the way with his head or nip with frustration, are all disappearing without me addressing them head on.

I think it was Mark Rashid who said, ‘How do you make a light horse soft? Make him think.’ (it’s not a joke by the way…). I also think this applies to the horse that has learned that humans will manage situations for them, and they just have to blindly follow on the end of the rope. This is why tasks like teaching your horse to stand on a box are so rewarding and also so frustrating – you cannot force your horse to do it, you have to teach him, and to teach him, he has to understand how to think and subsequently how to learn.

N.b. None of this applies to training Dalmations.