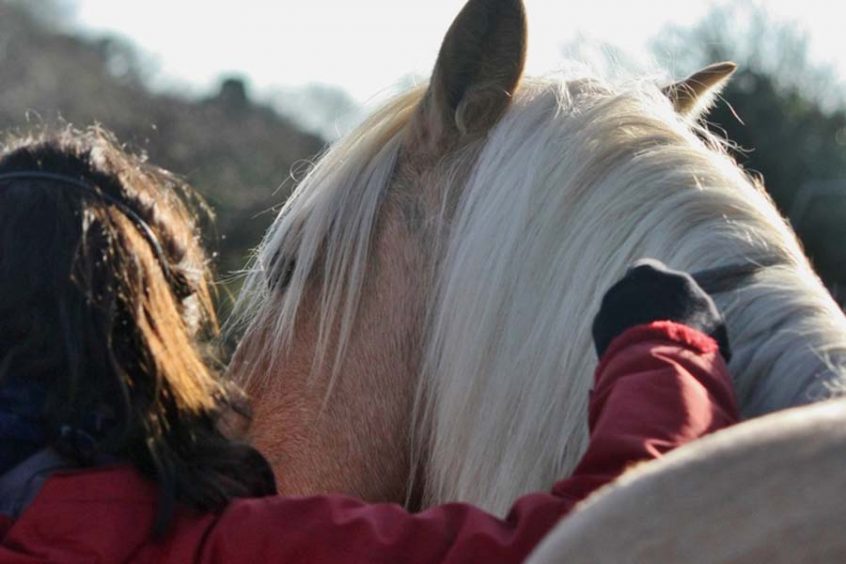 Tell Him what you and your horse are going to do this year.

There are three things of which you can be certain of in this life. Death, taxes, and at some stage, your horse will go lame. Horses will not, and should not be relied on. They are very much like Land Rovers in that they constantly keep you on your toes as you wait for the next thing to go wrong and wonder how much it will cost.  In recent times I have been reminded that while horses owe us nothing on the ‘life lesson’ front, for those of us who are obsessed beyond all reason they do throw up the odd thought provoker.

I have just got back from extraordinary week training with Philippe Karl in which I learned loads, laughed greatly and patted my yellow horse a huge amount.  I also spent a lot of the week pondering on the real challenge of this course- which it strikes me, is one of mental fortitude.  Over half the student instructors had to bring their second, third, or someone else’s horse. Not a single horse has gone lame because of the work, they have all succumbed to those age old horse disasters such as being kicked in the field; getting a sinus infection; or jumping through the jockey door on a moving lorry (that old chestnut).   Bastards, every one of them.

Because, here – as they say in the US of A –  is the thing. You can, if you are so inclined, dedicate your whole life, your every penny, your health and sanity; you can sacrifice every holiday, most of your nights out,  to just (on occasion) reach a fleeting state of nirvana with your equine partner. You can spend all of your spare time practicing, trying to improve, working on and off your horse to get good enough that you and your 4 legged friend can share the music together. All of that time, effort, blood, sweat and swearing to get to this pinnacle, and then, the bloody thing gets kicked in the field and GAME OVER.

If you train to become a great cyclist and you break your bike, you can buy a new one. If you work all of your life to become a fabulous musician and you drop you guitar, chances are, you can find another one somewhere (guitarists everywhere are screaming at me for how little I understand about their relationship with their instrument, but come on, Fender did made a few).  However, as a rider, you invest in a living animal and you develop a training programme to realise his beauty under saddle which takes many, many years to come to fruition and which is imprinted into that animal alone. If that horse ups and dies you might be able to buy another one which looks the same, which might move the same, but which you have to start training again from year dot.  The additional complete bugger is invariably you form a strong attachment, dare I say it, you fall in love with that particular animal. One in the same colour, which moves the same, well, it ain’t the same. It would be like saying that if your husband dies just find another one with the same colour hair and the same job – that should fill the gap. I’m not saying horses are like husbands or partners…horses are far more straightforward than that.

So, somehow, if you are going to throw yourself wholeheartedly into this stupid game you had better learn to love the journey as there is absolutely no guaranteed end result.

For many years I have allowed myself to be on something of an emotional roller coaster where my horses are concerned. When things are going well I feel like my heart might burst with joy. My cup runneth over. I look at my overdraft and think how little it matters. When things are going badly I can barely think of anything else, and it does not make me smile. I lose sleep. I look at the pounds haemorrhaging out of my bank account and have to breathe into a paper bag.  In recent times, nay (neigh), recent weeks I have begun to realise I have to find some kind of middle ground or I will likely be sectioned.

Several years ago I bought a horse that I loved. I really, really loved him. I knew he had a multitude of physical problems but I could fix them!! After one really great ride when things were on the up I skipped round a corner into Tom Widdicombe, and told him with a grin as wide as the sky that things with Gou were really, utterly, marvellous. He looked at me with grave concern and said something like, ‘Oh dear, try not to get too elated – it’s just one ride Kate’. Obviously I wrote him off as a miserable old bastard (I stand by this) but it turns out he was right.  Dear Gou. How I miss your big white ears.

Thankfully, it seems that recently, somewhere along the line I have found a slightly different way to deal with this crazy rollercoaster.  Des and I had a good week with PK.  Monsieur Karl likes my horse, my horse likes the work, I like riding my horse.   But THE day I got back from the clinic the aforementioned horse gets tangled up in his rug and by getting out without undoing any straps is now lame with a sore back. On top of the ongoing issues with the broken bone in his foot, who knows what the future holds.  DO NOT COUNT ANY POULTRY. Lesson No 1.

So how does one learn to balance the hopes, dreams, passion, optimism, ambition,  joy, elation and progress, with the crashing falls,  injuries, unexpected curve balls that life throws in, failures and other shit. I think its called Duality or Dualism, and I reckon other creatures understand it better than us. It is the very nature of that thing called life – being able to hold the dark and the light, the night and the day, as part of one whole. Not being so buoyed up by the great days that we come completely unstuck on the bad ones.  Understanding how to hold the rough and the smooth in the palm of our hands and realise that there cannot be one without the other, so we had better not judge one as good and one as bad.  They both just am are (I refer you to a previous post).

The day before I travelled up to train with PK, I was standing contemplating Des’s level of filth and wondering how on earth I was ever going to get him shiny without him hating me forever (he detests being made clean) and then Mary Portas’ ‘Inheritance tracks’ came on Radio 4 (if anyone wants to know how to live a rock and roll lifestyle, please do get in touch…) and she chose ‘Into the Mystic’ by Van Morrison. This is a song of my childhood – of times when people I loved were very alive and very happy. It hit me in a way that only music can and I cried and smiled leaning up against my golden horse’s neck. Genuinely crying and wholeheartedly smiling – who would have thought you could have the two things so completely in unison? Van is a bastard too.

I could spend the next ten years training Des to the highest pinnacle of high school, and then he could fall in a ditch and drown (a likely outcome seeing as he recently spent a whole night stuck behind a log lying in front of him, when he could have just turned around and walked away in the other direction).  I could work very hard for the next three to five years with the aim of passing my exams with PK and it all go to rats at the last minute if the horse I am working with does something selfish like die.

The fact that the working with horses provides no guarantees, that there is so much fragility in the pursuit, well that’s part of the beauty of it I think. As well as the complete heartwrenching bugger of it. I want my horse to be 100% sound for the rest of his life and I want him to live for as long as I do.    However, he came with no contract to this effect and if I thought about this too hard I should probably stop now. So if the end result is the only important thing then you are likely to be missing a trick.

To carry on with this crazy pursuit where so very much lies outside of that human concept of control, well, one had better take up drinking (check) and get ones head around  failure and success being two sides of the same coin.  And at the end of the day, and I mean the very end of the day, it’s all much of a much-ness anyway.

Into the Mystic  – Van Morrison.