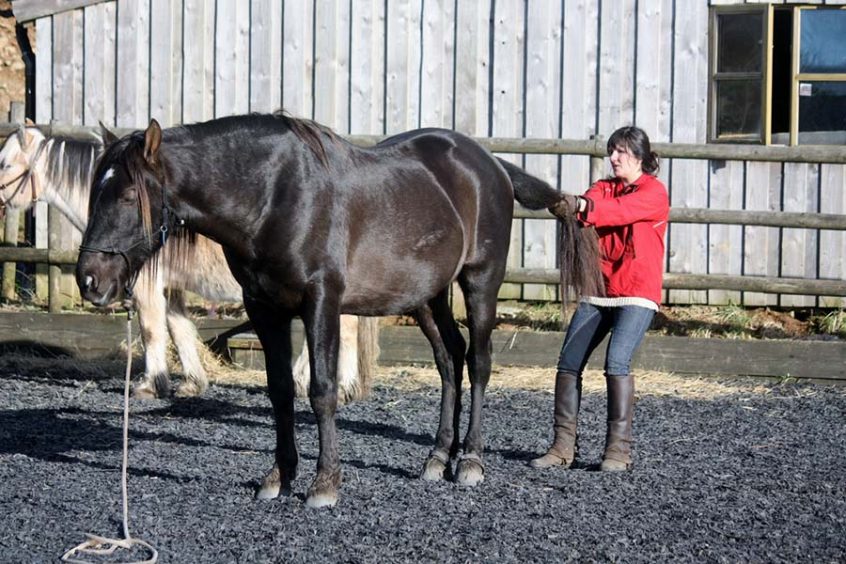 ’It depends’ is something horse trainers say which used to wind me up good and proper. I thought they were doing it to be enigmatic or convince me I needed a lesson with them. It also used to really get my goat that people like Tom and Sarah would say, ‘I really can’t suggest something without seeing the horse’. BUT PLEASE JUST TELL ME WHAT TO DO! Now, having rather oddly ending up in the position where people contact me to ask for advice about their horse, I hear myself saying (or writing) ‘ Well it depends….’ and , ‘I guess I can’t really say without seeing the horse’. And I can only imagine how annoying that must be. However, it turns out it is the only genuine thing you can say.

Take my own recent misjudgement and how it turned out to be an ‘It depends’ situation with two horses I know very well. All three of my horses are naturally very generous with their energy, and it is easy to feel like a certain pelvis-tilting moustachioed man at C&A (you know who I mean) in terms of creating forwards energy with a glance of your eye, an out breath and a change in your posture (both on the ground and under saddle). What I had begun to realise was less easily influenced by me, were the downward transitions. In Des’s case it was a little, ‘Yeah, in a minute human, I’m doing stuff!’ In Tycoon’s it was, ‘Hang on while I just get my balance here, give us a second, I’m trying really hard….’.

And therein lies the difference which I failed to spot adequately and which led to me trying the same thing with both horses and getting very different reactions. For Des it was an extremely positive experience and one which helped him mentally and physically. For Tycoon, it reignited his significant claustrophobia and need to run. Not so good. I hope I have learned something and at least it proved that my horse and I now have enough ‘cash in the bank’ that we are still in the black despite this. But it just reminded me that one thing which worked for one horse really did not work for the other.

Hence, I am cautious of giving any advice until I meet the horse. And the person. I have recently been introduced to a big ginger mare (who has somewhat stolen my heart) who, had I just ‘read’ about her behaviour in an email, I might have thought somewhat differently about. She is an ex-competition horse and it seems has learned that her best line of defence is to come out fighting. I admire her tenacity and tenacity and that she has not just shut down and accepted her lot. I also love her owner for being so prepared to try to work things out from this horse’s perspective.

She is a VERY big horse, and I think somewhere along the line she has ended up in situations on the ground where she has gone up on her back legs (quite an impressive sight) and it has either resulted in scaring humans off, or in a massive fight. Now, had this horse’s owner emailed me about this I ‘might’ have said (if I gave advice in emails) ‘The moment that horse hits the ground do something she doesn’t want to experience again – back her up, circle her tightly etc.’ But on meeting the mare it is pretty clear that she is sort of ‘looking’ for that kind of reaction from a person. Maybe she is so used to fighting with people that she just starts at where she knows it will end up anyway.

So what we do when she rears is, well, nothing. Just let the reins (or rope) slide through your hand, breathe out, continue with what we were doing before. You can see her wildly blinking and thinking about this – I imagine that she is wondering when the fight will start, when she will get sent backwards or whalloped (not by her current owner I should add). I might be wrong, but it seems that way. We want to show her that we don’t want to fight and the only consequence for her action is to resume normal service. I wouldn’t have been able to suggest this without meeting the horse and getting a sense of what is happening (and also meeting the person, who is able to read her horse very well).

There is another mare I am working with (who I also have a huge soft spot for) who also has a tendency to rear, and until recently, come at you and over the top you. Again, had the person just described to me what was happening I could have ‘prescribed’ something very different from what we are actually doing. I have been working with the horse for some time, and initially I set a couple of non negotiable boundaries – don’t blast through me and don’t come at me. We will work the rest out along the way. I couldn’t have explained how that was going to be done until I did it, as it has been a really organic process. And it has became apparent that she is an incredibly sensitive horse once you chip away the concrete outer layer, and that would have been easy to miss. It would have been a mistake to judge her on her write up (I know that, because I did it). She gets annoyed when a person’s timing is out, or if they do something she doesn’t understand, as actually she is trying so hard to do what you ask. And it took me a little while to understand WHAT she was trying to communicate, as her reactions had become so massive it was hard to see the cause. Thankfully, she also has an owner who is more than prepared to listen and is working hard to make sense to her horse.

And the other big ‘It depends’ element of it concerns where the person is at. What can they handle? What do they really want? A good example is of someone who contacts me to say that their horse doesn’t go forward (this seems to be an issue for lots of people). It’s not until you meet the person that you can understand whether they really want to go forwards themselves. Very many of us don’t actually want to sit on the amount of forward our horse might really be able to offer. And I’m not into pushing people wildly out of their comfort zones – I’m not sure scaring the **** out of people is the best learning experience. You have to see what the person really wants right now, and what their experience and current capability allows them to do. Sometimes you have to work out a compromise which suits the person as well as the horse. What’s the point in telling them what the perfect solution would be for the horse, if it’s really not the perfect solution for them?

And then there are all those little additional things which can be massive to horses, but which humans miss when diagnosing the problem. What if the reason the horse doesn’t go forward is because the person isn’t breathing, or they’re gripping with their thighs, or they are holding on to the horse’s mouth with a death grip? So many of us want a ‘How to’ formula, but until you know what the recipe is you can’t work out why the cake hasn’t risen. It’s a bit too much like George’s Marvellous Medicine, you don’t ever know exactly how much brown shoe polish or toothpaste someone has put into the mix, and why Grandma is small this time when last time she shot through the roof.

One day I hope I will stop making clanging misjudgements with my own horses. But the only way any of us are going to be able to get to the stage where we can quickly diagnose an issue and come up with a solution is to spend as much time as we can with as many horses as we can, getting things wrong and scratching our heads. Revel in your failures as they are the only thing which makes it possible for you to greet the next challenge with a little more understanding under your belt. And if anyone ever contacts you about a problem with their horse, tell them it depends, but don’t forget what an annoying thing that is for someone to hear.