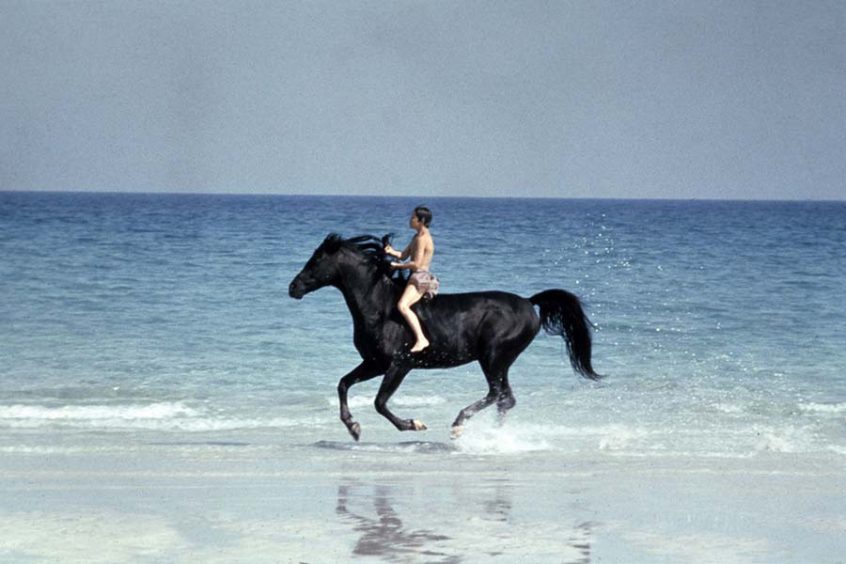 Over the past few years it has become gradually clear to me that a band I swooned over when I was 14 still remain dear to my soul. They still move and inspire me, and speak to a part of me which I think my horses know about (no, not my pockets…). Surprisingly, and despite all that time keeping a laminated picture of Michael Stipe in my bra, it’s not REM.

The band are The Waterboys; they’re not cool and they aren’t really that big, but to my mind, they are clever. You may be familiar with ‘The Whole of the Moon’ which is their most famous song. (Apologies if you are a committed fan currently listening to your vinyl copy of ‘December’.)

It turns out they have crept up on some other people over the years too. Richard Curtis, he of Four Weddings and a Funeral fame, says of them, “ I’ll lay down my cards at the start: I’ve listened to a lot of pop and, as the years go by, I’m starting to feel, to my own surprise, that the Waterboys are the next best group after the Beatles.”

So, what have The Waterboys got to do with horses? And for me, they really do have some kind of connection, although Mike Scott doesn’t look like a man who has ever donned a pair of jodhpurs.

When I was a little girl I loved horses not because of the rosettes they could win me, or how much money they were worth, but because they are beautiful. They are wild and powerful, and yet gentle and could find some kind of connection with people – a complete mystery and a miracle as far as I was concerned. My favourite books were ‘The Black Stallion’ and ‘Ginny and Shantih’; instead of the ones to do with spiteful girls, gymkanas and grooming kits. I liked my horses on the sparky side of tame, and spent hours drawing wild maned stallions hammering across open countryside.

Mike Scott is probably a little crackers, (as Adam pointed out, ‘He has been singing about fairies since he was about 7’) but what he writes about, and how his music makes me feel, taps in to the same bit of my soul which horses ignite. Wild moors, seas, rivers, huge skies and raggle taggle gypsies. When Mike Scott sings of ‘spirit’, to me it means that which is in everything; the untouched and untamed. Horses bring us closer to this part of ourselves, they offer us a link to ‘the wild’, whilst being gracious enough to share their strength, speed and power with us.

Man is tethered, but Spirit is Free

Many of us have dreamed of somehow harnessing the power of horse. However, the reality is often that the ‘unbridled’ inside of a horse is bit too much. We like looking at all that power in the field, but we don’t want to sit it on it, thanks. And we don’t want it to suddenly take us sideways at the sight of a bin. So, we try to squash it. We ‘de-sensitise’ horses – draping them in tarpaulin, flapping things at them and trying to make them immune to things which might scare them. But what happens all too often (and I know, because I have done it) is that we make them immune to life. And to us. We snub out the flame of ‘horse’. Or, we use bits of metal and leather and pain to overpower them – I heard someone say rolkur was designed to let little women ride big horses. And a significant problem is that we are beginning to think a horse strapped in and contained like this constitutes ‘beautiful’. WE are becoming de-sensitised – to the pain, to the fact the horse can’t see or breathe properly, and that it is doing irreparable harm to their beautiful bodies. It certainly wins big money. I guess, in the same way that those who govern our education system think that snubbing out creativity and individuality will be good for us all in the long run, it gets hard to imagine there might be a different way.

When I watch Philippe Karl ride his horses you can see there is a whole lot of horse left in there. He enjoys working with that energy – but then he can sit on anything, so that helps. For the rest of us, who maybe want to keep that spirit but don’t want to be flung off sideways, what are the options? I remember Sarah Widdicombe saying to me once that rather than de-sensitising the horse to life, you need to sensitise him to you. Can you find ways to show your horse that he can turn to you rather than run to the hills? Can you keep everything your horse has to offer and shape it, rather than trying to erase it? I don’t know if I can, but I’m giving it a go.

I had done a rather marvelous job of shutting Tycoon down in an attempt to deal with his bolting. The problem was the bolt was still in there, I just didn’t see it coming anymore. I have had to go right back to the drawing board and re-think what I can offer this horse, to keep him ‘awake’ and with me. And I am trying not to treat him like a pet, or a baby, but as a HORSE. Well, sometimes I do still kiss him on the nose, but I try to keep a check on that. And what I have found, to my sheer delight and amazement, is that the spirit in me is more important to him than a treat. When the feeling is good between us, when we connect at that level, then there is something which both of us seem to understand.

When I listen to ‘Whole of The Moon’, which I think is an unusual song as it is about magnificence and brilliance, it makes me want to go and get my golden horse out and head for the high ground in the middle of the night. If you leave your horses open to be horses, and find ways to work with all of that incredible energy, it can provide you with a glimpse of something which is rather wonderful, and maybe takes you away from thinking about the bills, or the terrible conflict in the world, or whether you have got time to listen to Archers.